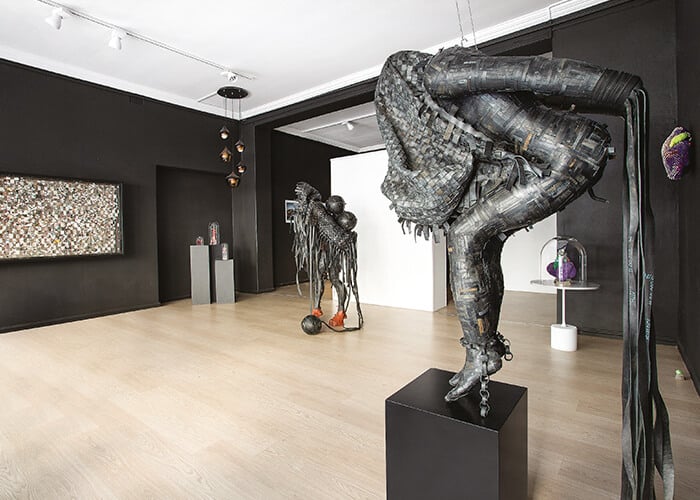 – John Steinbeck, ‘The Grapes of Wrath’

First published in 1939, John Steinbeck’s Grapes of Wrath chronicled the Dust Bowl migration of the 1930s Great Depression by telling the story of a family from Oklahoma, driven from their land and forced to head West in search of a better life. Taken from a particularly moving chapter, the above excerpt highlights the complete disillusionment at the root of the problem, namely, the disconnection of those pulling the strings to those that have lived and worked the land for generations – a world void of accountability: “We’re sorry, it’s not us” explains the man on the iron seat, preparing to drive his tractor through their house, “It’s the monster. The bank isn’t like a man… The bank is something more than men, I tell you. It’s the monster. Men made it, but they can’t control it.”

From India and Bangladesh to South Africa and the DRC, the tale of displacement seems to follow a similar narrative – the indigenous peoples must be moved out in the name of development, following the global demand for natural resources. But, and here is the crux I find so eloquently handled in Steinbeck’s novel, just where is this demand coming from, and what does this monster look like?

I’m on my way to see ‘What’s The Matter?’ a group exhibition in Cape Town’s CBD. I am being ushered along by people milling about in the streets, some talking hurriedly on their phones, others clustered together, swilling beer from plastic cups. Just before I step out of the street and into the gallery space, I pass an open roof car (the game viewing type) boasting their own masquerade of people in an odd mix of sporting attire and industrial gear. All eyes are on them as an elderly man appears out of nowhere, asking if I have any spare change. “Sorry, I know it’s not much” I admit, handing him the few coins I’ve managed to forage before slipping into the gallery, feeling remarkably uncomfortable by this spectacle of indifference. “It’s the monster,” I tell myself, “Nothing you can do…” 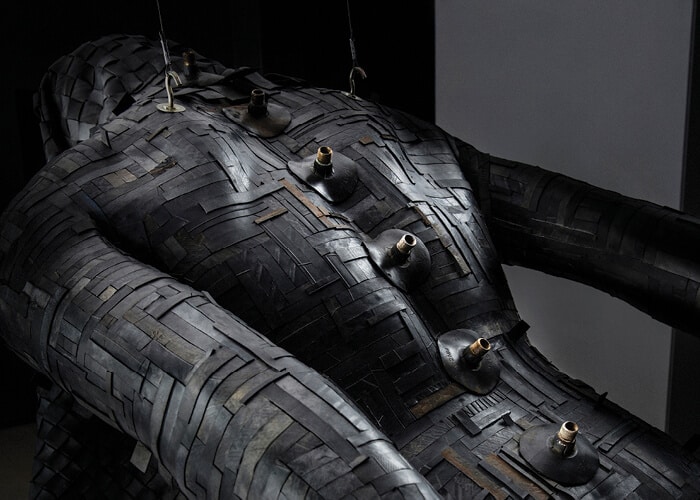 The first work I notice is a life-size sculpture, pulled together with rubber over a fibre-glass cast. Suspended by hooks from the ceiling, Revenants I (2016) hangs in the gallery window, arms pulled back as if in the middle of some contortionist exorcism. I recognise it as one of Patrick Bongoy’s works – not by its form – but because of the materials used. Earlier this year I had visited Bongoy at his home-comestudio in Salt River, where he’s been living since he left Kinshasa in 2013. Standing out back amongst a heap of old tyre tubing, he tells me that his country is in the rebuilding process, “You can find mess everywhere.” While living in Kinshasa, Bongoy would walk the streets with a large bag on his back, collecting the material fragments of this mess. “The materials have a lot of meaning, because they speak about pollution in the larger sense, not only about the garbage that people throw on the streets. Most parts of society are polluted. People don’t have jobs, there are no opportunities. After that people go into the streets, they celebrate everyday at the bar, because they have nothing to do. Society, culture, everything is polluted. What can people do?” 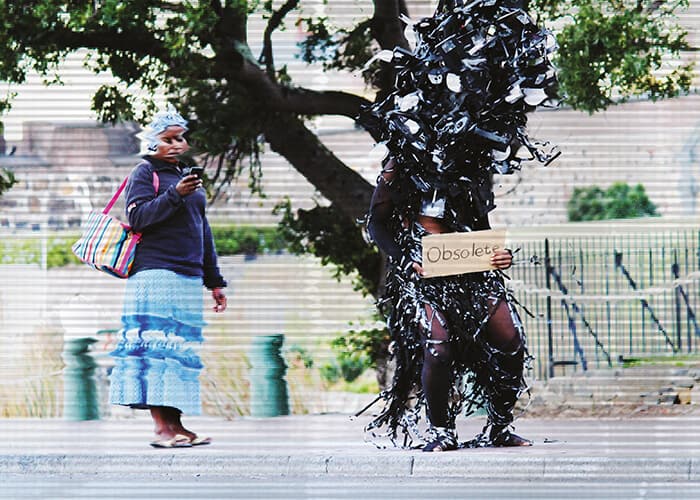 Cloaked, suffocated, and weighted, the burden of Bongoy’s sculptures manifest as part and parcel of the body that bears it; shackles and high heels; arms and whips; contorted forms wrestling to escape the claustrophic confines of their rubbery exo-skeletons. It’s a work about displacement, a problem particularly prevelant in the DRC, where plentiful resources have been the source of conflict and oppression since the early twentieth century. As Georges NzongolaNtalaja points out in The Guardian, “It was during the colonial period that the US acquired a strategic stake in the enormous natural wealth of the Congo, following its use of the uranium from Congolese mines to manufacture the first atomic weapons, the Hiroshima and Nagasaki bombs.”
Although the DRC gained independence from Belgium in 1960 under the leadership of Patrice Lumumba, it was evident that the coloniser(s) had little interest in relinquishing control. Well aware of this, Lumumba recognised that the DRC would never achieve genuine independence until the state had complete control of their resources, which he viewed as key to economic reform. In August that year, Lumumba gave a speech at the All-African Conference in Leopoldville (later Kinshasa) which made his position clear: “Political independence has no meaning if it is not accompanied by rapid economic and social development.” 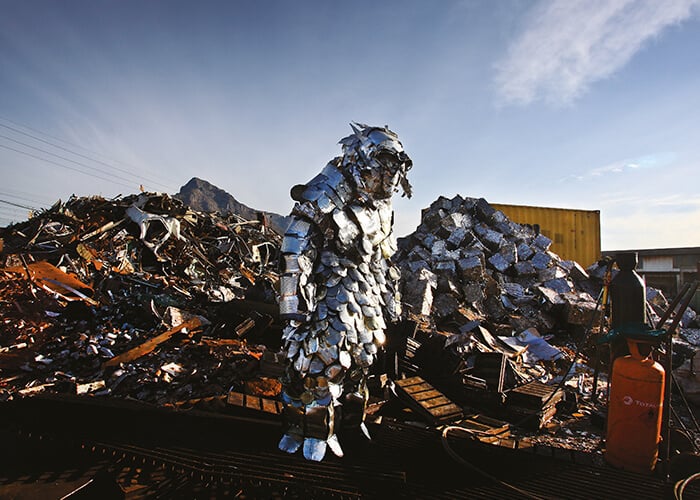 With the Cold War looming, Lumumba’s appeal for self-determination was perceived as a threat to western interests, and, with the support of the UN secretariat, bought the support of Lumumba’s Congolese rivals, leading to his assassination in 1961. The wave of ensuing violence, political unrest, and displacement that followed, despite a relatively stable economy, was amplified by the country’s economic fallout following the 1973 oil crisis and the global collapse of commodity prices, a situation that had become critical by the time Patrick Bongoy was born in 1980.
“These reluctant travellers will suffer trauma, both visible and invisible losses as they are transformed into outsiders and aliens,” reads Bongoy’s artist statement. “Being deprived of the opportunity to feed and protect themselves, their entire sense of self-worth and dignity is abruptly stripped away as the migration continues… And if they were to return, what will they be… even if that were possible?”
As if to re-itterate his words, there is a video playing on the wall perpendicular to Bongoy’s Revenant II (2016). It’s the story of VHS, back from the dead. Wandering the streets of Cape Town – archaic, unwelcome, and disillusioned – Francois Knoetze’s embodiment of an antiquated material, like Angela Carter’s “scarecrow of humanity,” is having a tough time ‘fitting in.’ Both immersed in the crowd and alienated from it, this mythological creature eventually finds itself begging at a robot, a piece of cardboard in its hand which reads ‘Obsolete.’
“In the same way that the city’s garbage dumps are relegated to the hidden outskirts, the course of [Cape Town’s] history often lies obscured by a spectacle which promotes luxury, conspicuous consumption and material excess,” he explains, acknowledging his own stake in this conundrum. Again, there is this feeling of entrapment, of being stuck, “What can we do?” 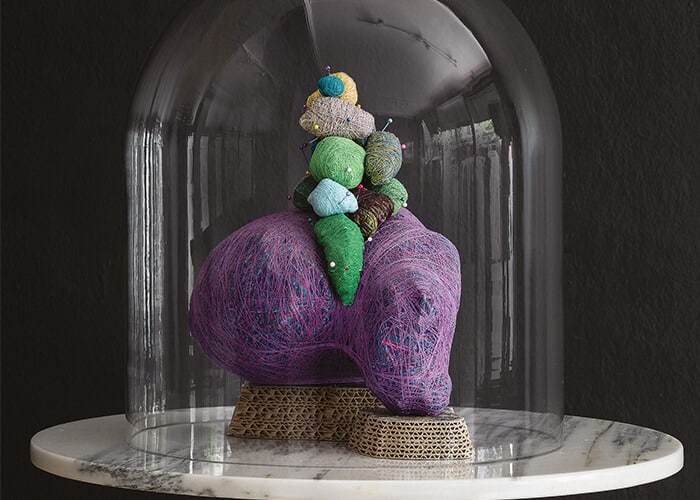 Although it doesn’t provide any obvious solutions, Mark Rautenbach’s Purple Noonoo may help in some part to pinpoint our monster. Fashioned from personal, unidentifiable waste – non-organic material that isn’t plastic, paper, cardboard, or glass – Rautenbach decided to sew his indisposable extensions together in neat, amorphic little balls. Enshrined in glass and suspended off the ground, these evasive forms appear to balance precariously on top of one another; a caged something or other attempting to hide in a “If I can’t see you, you can’t see me” kind of way.
Read together, it becomes apparent that rather than the bank or any other complex structure of (dis)order through which we pattern, objectify, and distance our fears, the real threat posed is our inability to acknowledge our own interdependence, to maintain our little echochambers of self-gratification and denial, and to be at home in feeling not at home.
https://artafricamagazine.org/wp-content/uploads/2016/11/AA_Newsletter_2016_Nov28_Bongoy1.jpg 500 700 Art South Africa https://artafricamagazine.org/wp-content/uploads/2018/02/ART-AFRICA-LOGO-300x62.png Art South Africa2016-11-24 08:46:222017-07-17 11:45:31'What's The Matter?' Patrick Bongoy, Francois Knoetze and Mark Rautenbach at EBONY Curated