A student preparing the exhibition of students’ works in the Fine Arts Gallery of the Arab League Park, organised by the Casablanca School of Fine Arts, June 1968. Photo M. Melehi. Archives Chabâa family. All images courtesy of the Museum of African Contemporary Art Al Maaden (MACAAL).

When one thinks of significant contributors to Moroccan and Arab Avant-Garde, Mohamed Melehi – an artist and visionary is paramount. Originally developed and previously showcased at the Mosaic Rooms in London, the retrospective ‘New Waves: Mohamed Melehi and the Casablanca Art School Archives’. Curated by Morad Montazami and Madeleine de Colnet, for Zamân Books & Curating made a turn at MACAAL, Morocco. The retrospective offers viewers a chronological journey of the artist’s career with previously key unseen works, providing a new perspective and narrative.

Sara Moneer Khan: Mohamed was an Arab modernist master, and leading figure at the Casablanca Art School, who’s signature psychedelic paintings pay homage to the long lineage of abstraction in Islamic art whilst giving a nod to Frank Stella, Esworth Kelly and the Bauhaus. What does ‘New waves: Mohamed Melehi and the Casablanca Art School Archives represent to you as curators?

Morad Montazami and Madeleine de Colnet: “New Waves” is a reference to the everlasting visual pattern of the wave that still obsesses Melehi to this day. But it’s mainly an expression understood as a motto for breaking the (colonial) rule, initiating an artistic revolution and so on just as the Casablanca Art School and Melehi did in their own rights. The implicit reference to the cinema “new wave” movement is also at play there since we talk about the 1960s as a common era for transnational and transmedia avant-gardes. The exhibition for us represents, first of all, a celebration for a visual heritage that was wrongly overshadowed for the global art scene and international museums. “New Waves” is also about underlining the multiple facets of a cosmopolitan artist from the African continent like Melehi: from his geometric experiments to the cultural revolution put in motion at the École de Casa and his key role in the development of art education in Morocco, as well as his significant work as photographer, editor, designer, graphic artist and muralist, which has largely contributed to shaping the aesthetics of post-colonial and pan-Arab artistic networks. 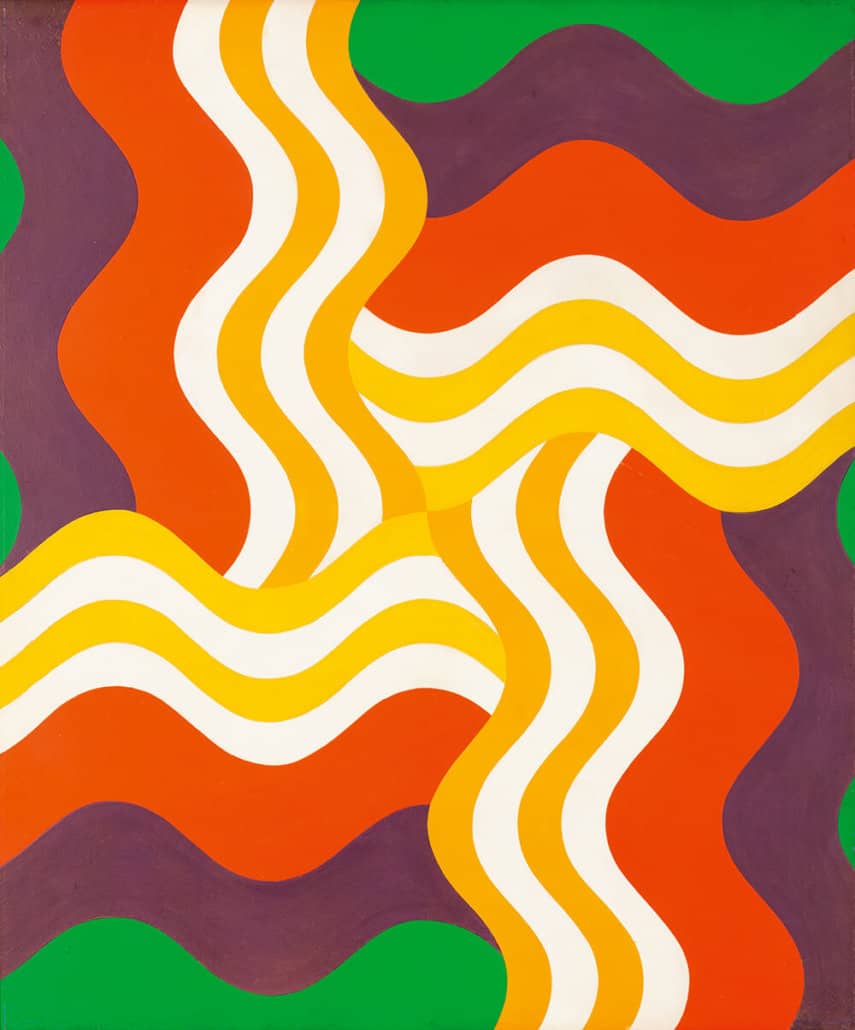 How did your role as curator’s, form the curatorial narrative of presenting the “golden age” of the Moroccan, Arab, and African avant-garde.?

Offering a richly-documented set of chronology and topics of Melehi’s travels and trajectory, the exhibition wants to show how “globalised” before its time his experience could be. Our research led by Zamân Books & Curating (the platform for study of Arab, African and Asian modernity’s) consists of retracing the steps of a path that is more complex than it might seem – extending beyond the binary schema of East and West. As we worked on classifying a very high amount of visual archives and artistic documentation around

the Casablanca Art School, and more widely on North African arts of the 1960s, we were actually in a position of editing a visual history in many different directions. Our role then, as not only organizing a space for the gaze, but also a space for geographical connections, expanded to that of working around a cartography of documents. In that perspective, we never act upon a preconceived idea of a “golden age”, but we rather do our best to simply find the right order and place for each image to take the most truthful signification in a coherent but lively narrative. Eventually, it can be confessed that still from that continuum of images and historical data what resonates the most with us, is this feeling of a golden age for postcolonial arts and cultural growth in the Global South.

The exhibition is divided into three sections – over different epochs. Could you describe these different sections and the curatorial vision for each?

We begin with 1957-1964. FROM ROME TO NEW YORK CITY: PRIMARY STRUCTURES AND SOFT EDGE PAINTING. The introduction to the exhibition takes us to Rome during the 1950s, where Melehi is one of the first artists from the African continent to show his work at avant-garde galleries such as Galleria Trastevere. The first exchanges and trips to New York, where he takes part in MOMA’s 1963 exhibition, “Hard Edge and Geometric Painting”, represent another new dimension for Melehi.

II. 1964-1978. FROM NEW YORK CITY TO CASABLANCA: THOUSANDS OF WAVES IN HYPERSPACE. The return to Casablanca marks the beginning of a memorable adventure in the studios of Casablanca’s École des Beaux-Arts. Here, alongside Farid Belkahia, Mohammed Chabâa, Bert Flint and Toni Maraini, Melehi led one of the most significant movements in the history of post-colonial art. This section of the exhibition also focuses upon his practice as a designer-activist and the 1969 manifesto-exhibition in Jma el-Fna square, as well as studio work and actions undertaken at the École des Beaux-Arts.

Part of the 1964-1978. FROM NEW YORK CITY TO CASABLANCA: THOUSANDS OF WAVES IN HYPERSPACE section. ©Omar Tajmouati

III. The 1980s. REFRAMING THE WAVE: BETWEEN AFRO-BERBERISM AND POST-COLONIAL ARCHITECTURE. During the 1980s, Melehi developed a dynamic synthesis of all elements of his practice: he returned to African and Berber sources (notably in the painted ceilings of rural mosques), as the Casablanca group always encouraged, but also from his architectural experience in the 1970s (with the Faraoui and De Mazières firm), as well as his muralist practice, culminating in the legendary Asilah Arts Festival, which he co-founded in 1978.

Part of The 1980s. REFRAMING THE WAVE: BETWEEN AFRO-BERBERISM AND POST-COLONIAL ARCHITECTURE section. ©Omar Tajmouati

How would you describe Mohamed’s contribution to shaping the aesthetics of Post-Colonial and Pan-Arab artistic networks?

Melehi was an artist and an activist, a graphic designer and a publisher but also a migrator. The agility and relevance of this travel and artistic journey sounds incredible for us, we have to imagine how a 20 years old art student from Northern Morocco, Asilah, could travel by boat, car, trains, and later planes throughout the Mediterranean up to the Atlantic and passing through West Asia. His Post Colonial and Pan-Arab legacy has to be understood through his ability to connect places and therefore reverse the viewpoint of modernist canons as well. The Pan-African Festival of Algiers in 1969, which Melehi participated in – after already taking part in the Alexandria Biennale in 1958 – concentrated the vibrancy of these revolutionary artists networks, from festivals to biennales: The Pan-Arab Festival of Plastic Arts in Damascus in 1971, followed by the Baghdad Al-Wasiti Festival in 1972, the first Baghdad Biennial in 1974, whose protagonists and network led to the Rabat Biennial in 1977 where the Casablanca artists were strongly involved. Not to mention the Palestinian cause and visual solidarities in which Melehi played a key role. Wherever he was involved, he always seemed at the right place at the right time, responding to the situation with diverse but still unifying visual designs.

Alongside with Bert Flint but also artist Farid Belkahia, Melehi contributed to relocate Moroccan visual arts tradition within the African continent and to reveal the direct iconographic links and connections between so-called “North Africa” and “Subsaharan Africa”. Hence the fundamental role of Saharan populations within the multi-cultural heritage of Morocco – research, particularly intense in the High Atlas and Anti-Atlas Mountains during the 1960s. This link represents for this group of visual thinkers, the genuine vector of Afro-Berberism, demonstrating that civilisation is not produced by urban and trading centres alone, but also by the desert and its nomadic populations. It is thus the case to retrace the deep cultural transfers, from one side to the other of a sub-Saharan border that self-dissolves, as these exchanges take place far beyond the context of national or colonial borders. On a methodological page, it’s fascinating the time spent and amount of photography patiently produced by Melehi; notably all of the painted ceilings in the mosques and zawiyas of the Souss, but also the Berber women artist carpet-makers who are no less “contemporary” than any other artist (as these carpets are still produced today which leads to dismiss the term “popular arts”).

‘New Waves: Mohamed Melehi and the Casablanca Art School Archives’  is currently being presented by the Alserkal Arts Foundation at Concrete, Dubai, UAE. This exhibition was organised in collaboration with the MACAAL. The exhibition was on view at MACAAL from the 21st of September 2019 till the 5th of January 2020.

What's on at Design Joburg