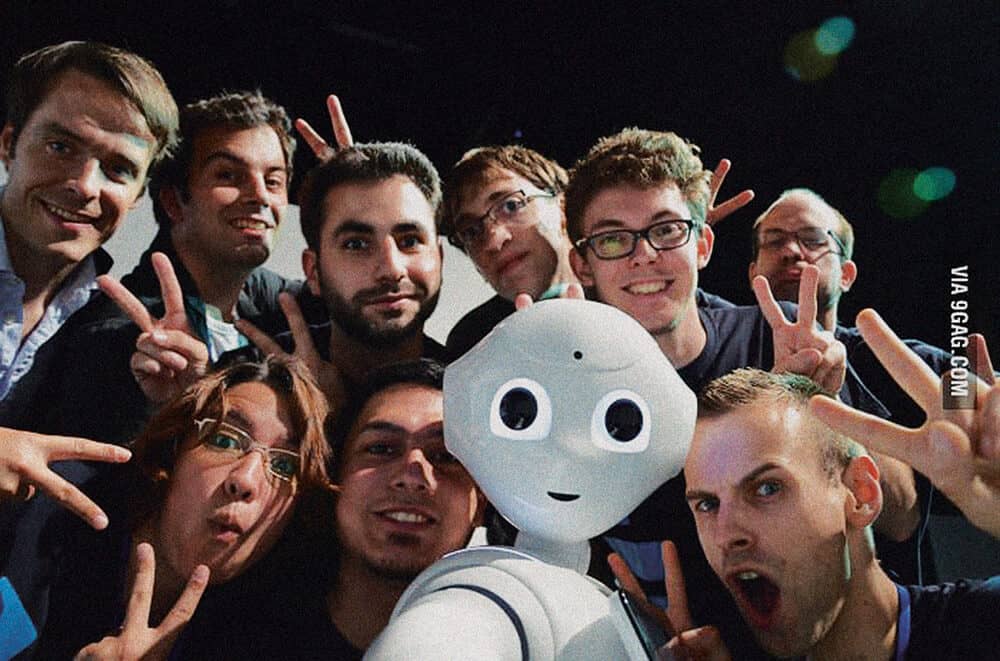 I’ve noticed a recurrent Internet meme in the last few years: that of robots failing to do what they’re programmed to do. For example, police robot falls into a pond. Service robot gets sad and shuts down. Social media robot develops anti-social tendencies – sounding like an alt-right nutcase – and has to be switched off in a panic. Funny these malfunctions may be. But they are also occasions where humans assert their superiority – of intelligence, common sense, decorum – over a form of technology which threatens to make humans redundant in many ways.

Welcome to the present?

FORUM: The Global Art Forum is an annual transdisciplinary summit, which has taken place in Dubai since 2007, as well as Doha, Kuwait, London and Paris in subsequent years. Each time, we invite some of the most compelling minds in the world to debate a theme. Previous editions have been about media, history, and trade. This year’s title is, “I Am Not a Robot,” and focuses on the power, pleasures and paranoia around automation. It’s Co-directed by Noah Raford, from the Dubai Future Foundation, and Marlies Wirth, a Viennese curator at the MAK – Museum of Applied Arts, with myself as Commissioner. I’ve been asked, here, to introduce some of the issues we are tackling, as well as the reasons why automation is around us more than ever. 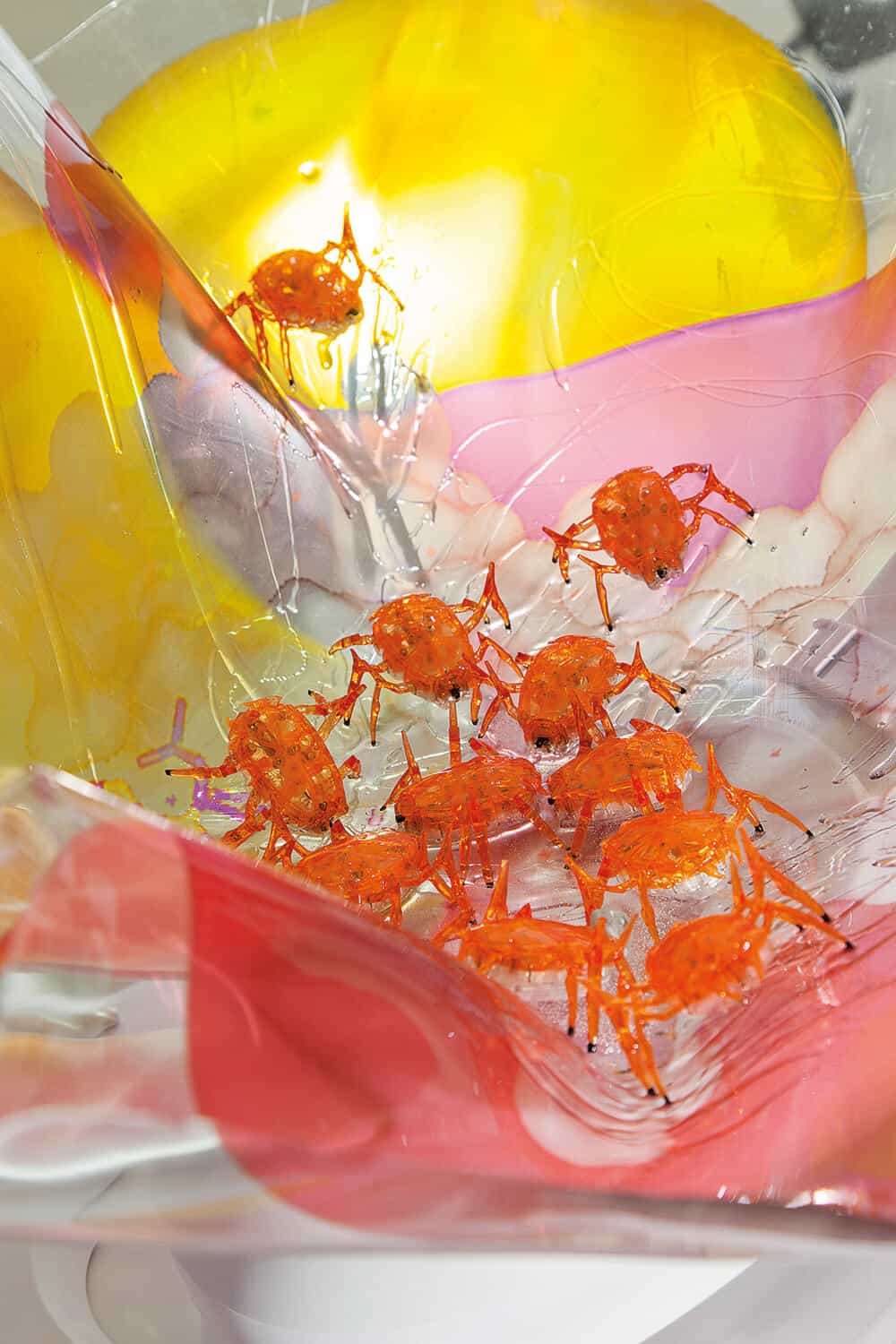 OLD TOOL: Mechanisation is, of course, much, much older than a Google algorithm. Ancient farming tools extended the power of man to shape the earth and yield volumes of food otherwise unimaginable. The Chinese invented moving type over a thousand years ago, automating the act of writing, which till then, had been sensuously hand-made. The Industrial Revolution in England during the 18th and 19th centuries ushered in textile factories, which gave birth to modern capitalism and modern, Western class systems. Men – and for a long time it was only men – synthesised with machines, in a ballet of repetitive production. Leisure time – having “the weekend off” – is a direct consequence of this industrialised labour. And now, in the 21st century, we are told that we might be forced to endure full-time leisure time because we won’t be needed for menial or maybe even sophisticated jobs. The history of automation is, amongst many things, a history of freeing ourselves into a kind of permanent holiday which you never asked for. Also, you also can’t afford the holiday. Because you don’t have a job.

FEEL FREER: In the same way mill and factory owners became super-rich by automating work life and maximising profits, there’s an imminent likelihood that digital automation will do just the same. Today’s privileged few (Facebook, Amazon, Ten Cent, Alibaba) instrumentalise the many (us). Except, it doesn’t feel like we’re subservient, or trapped. In fact, it feels like we’re freer than ever. Free to post pictures of our aaaaaaammmmmmaaazing holiday in Ibiza. Free to tweet at politicians we deplore. Free to order a three-piece tuxedo for our pet dog (and return it if she doesn’t like it). Free to dismiss facts. 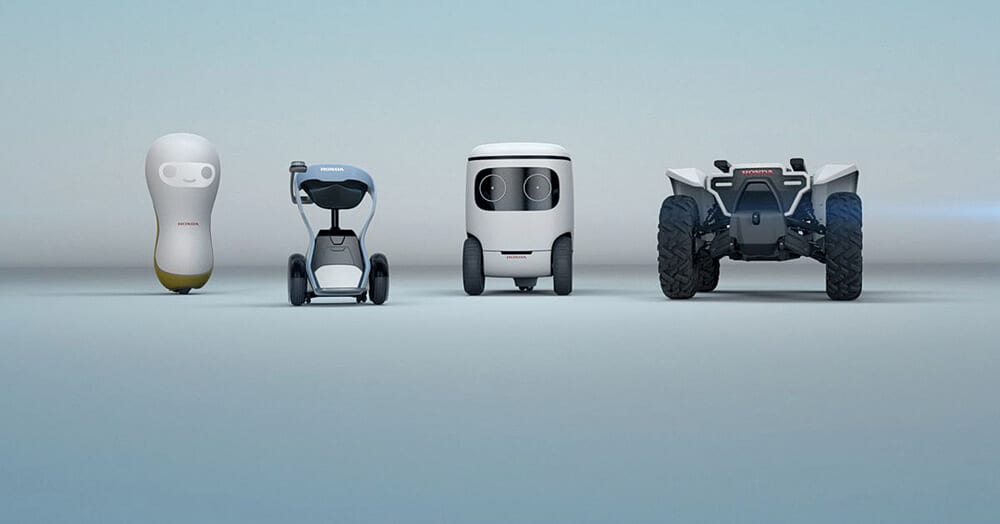 LEFT TO RIGHT: Smiling companion bot (3E-A18) which shows “compassion to humans with a variety of facial expressions”; the chair type mobility concept (3E-B18), designed for “casual use” in indoor or outdoor spaces; another “mobility concept with multi-functional cargo space” (3E-C18); and an “autonomous off-road concept” (3E-D18). All robot concepts form Honda.

SELFIECONOMY: The easiest way to admonish Generation Y – also known as Millennials – is to highlight their tendency to take pictures of themselves to post on social media. For some, this is deplorable vanity scaled up to global exhibitionism. What these critics don’t see is the way the selfie is at the very core of data capitalism, which itself not only requires constant machining by algorithms and server farms, but also, the permission from every person to be turned into harvested data. You are sold, resold, patterned and then ultimately fed back to you. A perpetual feedback loop of selfhood, mediated by automated processes, set to maximise profits.

what you’d do during the zombie apocalypse is more fun than thinking about how to mitigate global warming.

FACE DETECTED: One of the most hyped features of the new Apple iPhone X is its face recognition security. The idea being: instead of tapping in a code, or, even using your fingerprint, you simply look at the screen. If it’s “you” it will unlock the phone. However, not long after its launch, a Chinese customer realised that her new phone was unlocking with any of her female Chinese friends. She took the phone back. And found the same error in a new handset. Even with the third. This was not a problem being reported by Caucasian customers. The iPhone X had been “trained” to detect nuances in “Western” faces, whereas when it came to an “Asian” face, like the old racist adage goes, “they all look the same.” 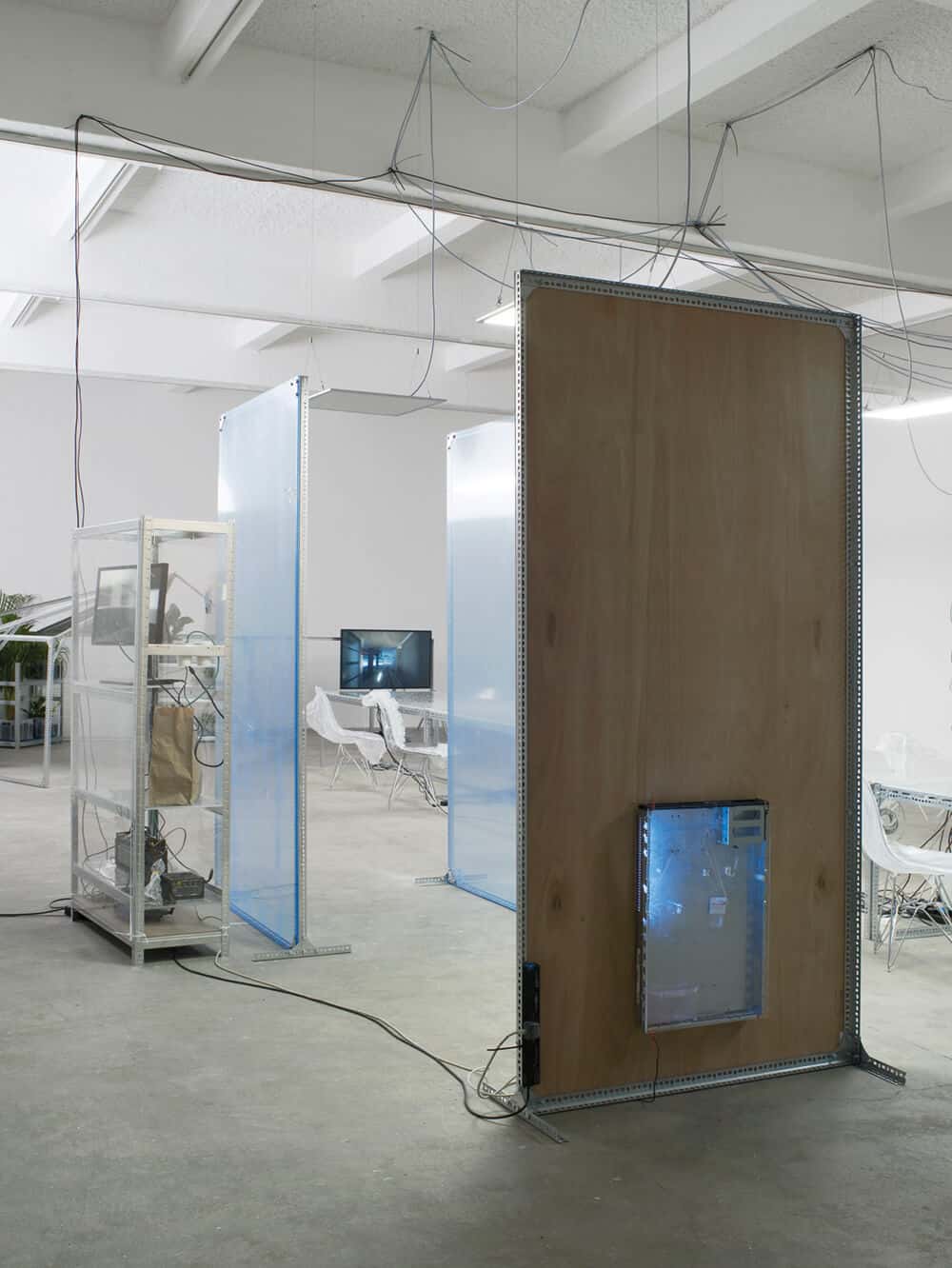 AUTOLOVE: Dating apps have become part of today’s dating culture. Algorithms match us up to someone that likes the same music, or is also crazy about kayaking. Very recently, it was discovered that millions of Chinese men who thought they were conversing with real Chinese women, were, in fact, merely interfacing with quite clever chat-bots. In the process, various companies had made hundreds of millions of dollars. Duplicitous as this may seem, one could also say that all these chatbots had passed the famous Turing Test: “a test of a machine’s ability to exhibit intelligent behavior equivalent to, or indistinguishable from, that of a human.” For Zheng Jiajia, who grew tired of pressure to get married, he decided to wed a robot he had created, called Yingying. There are 113.5 men for every woman in China, meaning, many men will never find wives. Could the gap be filled by androids or apps? Could a robot ever truly love you back the way you love it?

ROBO-ART: In her 2016 exhibition at the Fondazione Prada in Milan, the artist Goshka Macuga produced a life-like humanoid robot, with the technical expertise of A-Lab, from Japan. It stood and orated, citing manifestoes from history and science fiction literature, as if it were the last being on earth, the last repository of human knowledge left. Two years before, artist Jordan Wolfson presented at David Zwirner gallery, a highly sexualised female robot, (Female figure) 2014 – albeit smeared with dirt and donning a grotesque, Halloween mask – who twerked with her own reflection like a possessed demon. Pamela Rosenkranz’s 2016 show at Miguel Abreu, New York, contained multiple Amazon Echo voice-activated speakers, creating a babble of noise and feedback. Cecile B Evans has created several digital avatars – including one that bore an uncanny resemblance to the actor Philip Seymour Hoffman – all of whom seem, in some way, more fragile than fearsome. And Yuri Pattison’s work dives deep into the code and technicalities of the information infrastructure that dominates our waking and sleeping lives. Increasingly, artists are turning to the technical, social and political texture of automation. And, whereas Silicon Valley and Samsung are corporately bound to express unbridled optimism at their products, artists often take a more sceptical position, zooming in on everything that has been left out in zealous techno-capitalism. Perhaps the most fundamental impact will be in the art market though. How algorithmic trading might play a role in prices, becoming fully incorporated into the global financial system. And anecdotally, I heard that Silicon Valley employees prefer to buy paintings from Instagram accounts their friends have already bought from. They’d not be seen dead in a sterile white cube. Gallerists are too much like unfriendly robots.

Could the gap be filled by androids or apps?

Could a robot ever truly love you back the way you love it?

CULTURE MONOPOLY: In 1996, Gary Kasparov, the then World Chess Champion, played against IBM’s supercomputer, Deep Blue. Kasparov won. A year later, and this time, Deep Blue was the victor. It was the first time a reigning chess champion had been beaten by a computer, and marked a symbolic threshold, a shift in power. In 2015, Google’s AlphaGo “deep learning” computer program beat a world class human professional Go player, for the first time in history. This is all very well, you might think. But, will we see machine intelligences win Nobel Prizes for literature and science? The Pritzker Prize for Architecture? A Grammy for best song of the year? It is hard to imagine, even now, because, we have characterised AI as excelling in computational tasks – which include chess and Go – but, still profoundly lacking in creativity we can recognize as being “original.”

DISPLACE OURSELVES: In my opinion, though, some of the best poetry of the last decade is email spam: its language has a quality close to human, but also, jarringly wrong. As such, spam opens up a new, strange tenderness in human language. We need to embrace these glitches. In the same way that Copernicus shifted Earth away from the centre of the universe, we also need to shift our perception that we are at the centre of culture. It’s as if culture – with all its irrational drives, and opaque metrics such as beauty – is the last little defensive island that humans can stay protected on. When Andy Warhol said, “I want to be a machine,” could he have foreseen a time when a machine might say, “I want to be Andy Warhol”? 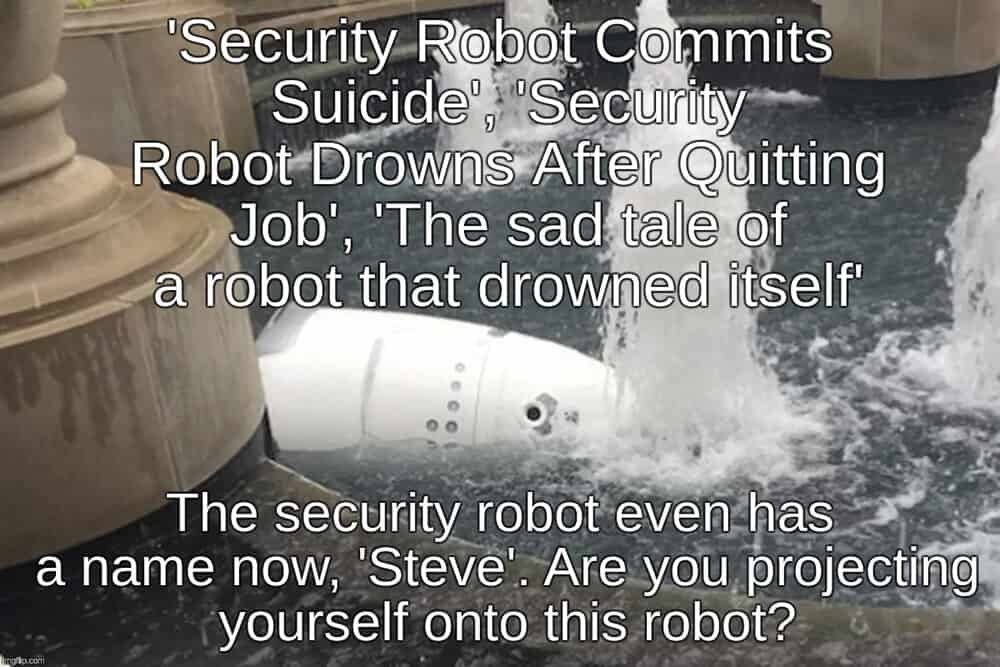 The Knightscope security robot ‘drowned’ itself at Georgetown Waterfront, Washington, DC. This spurred numerous memes which on social media platforms.

It is crucial to remind ourselves, even in the face of the most apocalyptic of scenarios –  made familiar by The Matrix, Blade Runner, Westworld, etc. –  that the problem of automation isn’t automation. The problem is us.

The Global Art Forum takes place at Madinat Jumeriah, Dubai, March 21 – 23, 2018, and is free and open to the public. For more details about the program click here.

The visual language of Queezy
Scroll to top