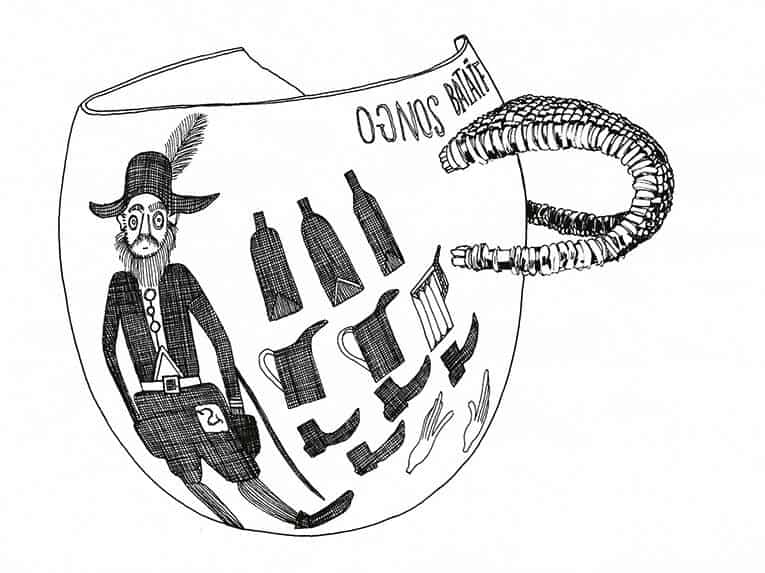 Historians tell us that it was only in the 1820s-30s that race congealed in Europe as a socio-biological fiction integrating physiology, psychology, and culture. Africans adopted race as an explanatory tool through colonization. Anthropologist Wyatt MacGaffey is adamant: “Nor do [Kongo] share the European habit of distinguishing civilisations in racial terms, that is, in terms of the characteristic psychological, mental, and moral attributes of populations.”  Instead, Central African artists showed an acute understanding that “European” identity was performed – it was a matter of how one dressed, drank, ate, worked, relaxed, and guarded one’s valuables.

Frans Bontinck argues that what most astonished Central Africans about the appearance of Europeans was not their skin tone but their “overdressing.” Until the early to mid-twentieth century, most West Central Africans (male or female) wore a knee-length wrapper. We perceive Congolese astonishment at European (over)dress in an engraving made from a contact situation. A. Daenen received the cup as a gift. He was one of the officers who led the attack on Zanzibari slave-traders in northeast Congo in 1891 and eventually rose to the rank of Chief of the Rubi-Uele District. During this period, Zande hoped to forge strategic alliances with the Congo Free State against common enemies.

The calabash is engraved so that a right-handed drinker would meet himself as he raised the cup. The artist named Songo initially presents the exotic foreigner in a vest, short pants, leggings, and boots. Then he unpacks the cipher and the accessories fly off: shoes, gloves, pipes, and bugle. The artist seems undecided about the officer’s hat: could it be a wig? He imagines the same figure bald without the hat. He imagines him again, without the beard.

The artist was fascinated by European drinking culture. There are wine bottles, water jugs, a beer tankard, two decanters on a stand and two large jars of Dutch gin. Fortunately, there is also a coffee pot should he have difficulty rousing himself from an alcoholic stupor. Songo offers the commandant a new cup for his collection, suited to a new kind of drink − palm wine.

Songo has given some thought to the shifting views presented by the oblong cup in use. What is particularly amusing is that the drinker sees only himself while his companions get a radically different view when he tips up the vessel to sip from it. What they see is the hapless European, stripped of his hat, pipe, bugle, and leg, on the bottom of the vessel.

The lovingly observed rifle sounds a note of caution but otherwise the cup holds the promise of Europeans and Africans drinking together in friendly sociability. It flatters the European as the centre of attention but still smuggles in wry, alternative points of view.

The cup with its gentle humour served as a diplomatic gift. An initiation mask collected at the height of colonial power (1938-39), instead uses humour as a weapon in order to show Yaka boys how not to be a man. According to field collector Hans Himmelheber, it represents a Belgian doctor (with pink face) looking into his microscope. His hands reach for his patient, who sits with her legs splayed open to reveal engorged labia. The doctor is excited by his medical exam – his own penis is huge and erect behind the table.

It would be hard to find a more searing satire of “science” as a pretext for scopophilia. Clearly, the rationale for gynaecology exams convinced no one! Annemieke Van Damme discovered during her research among the Nkanu (close neighbours of the Yaka) that initiation sculptures were made to provoke laughter, even as they provided aids for sex education. In fact, depictions often mocked named individuals, including colonial administrators, and thereby encouraged the boys to laugh at (rather than emulate) their behaviour.

However, did the mockery dissimulate tears? Sexual assault by colonial agents was widespread during the 1910s-30s. The Pende revolt of 1931 brought these issues to the fore when investigations revealed that a contributing factor was rape by a commercial agent for Huileries du Congo belge (HCB) in cahoots with a corrupt colonial official, who held women hostage (against the law) to secure men for forced labour assignments.

The Yaka mask alludes to violence but is surreptitious. Overt images of white oppression only begin to surface in Congolese art during the “Second Republic” of Mobutu Sese Seko (1971-97). Cheïk Ledy painted Religion of the Colonizer, a historical satire, in May 1993. The moralising label reads: “The right hand carries the Bible to announce the Gospels and the left hand, a gun to kill and pillage objects of value.” The precursor of colonialism strides tirelessly forward. With his mouth open to preach, he extends his right hand towards a group, who seem suddenly self-conscious about their dress. In his wake follow prospectors, one of whom uses x-ray binoculars to locate diamonds. His aide stands eager with pick and shovel. The path is strewn with diamonds and malachite copper ore. It is already clear that this wealth will benefit no Africans since the porters are starving and the leader steps callously over the victims he has shot to clear his way. 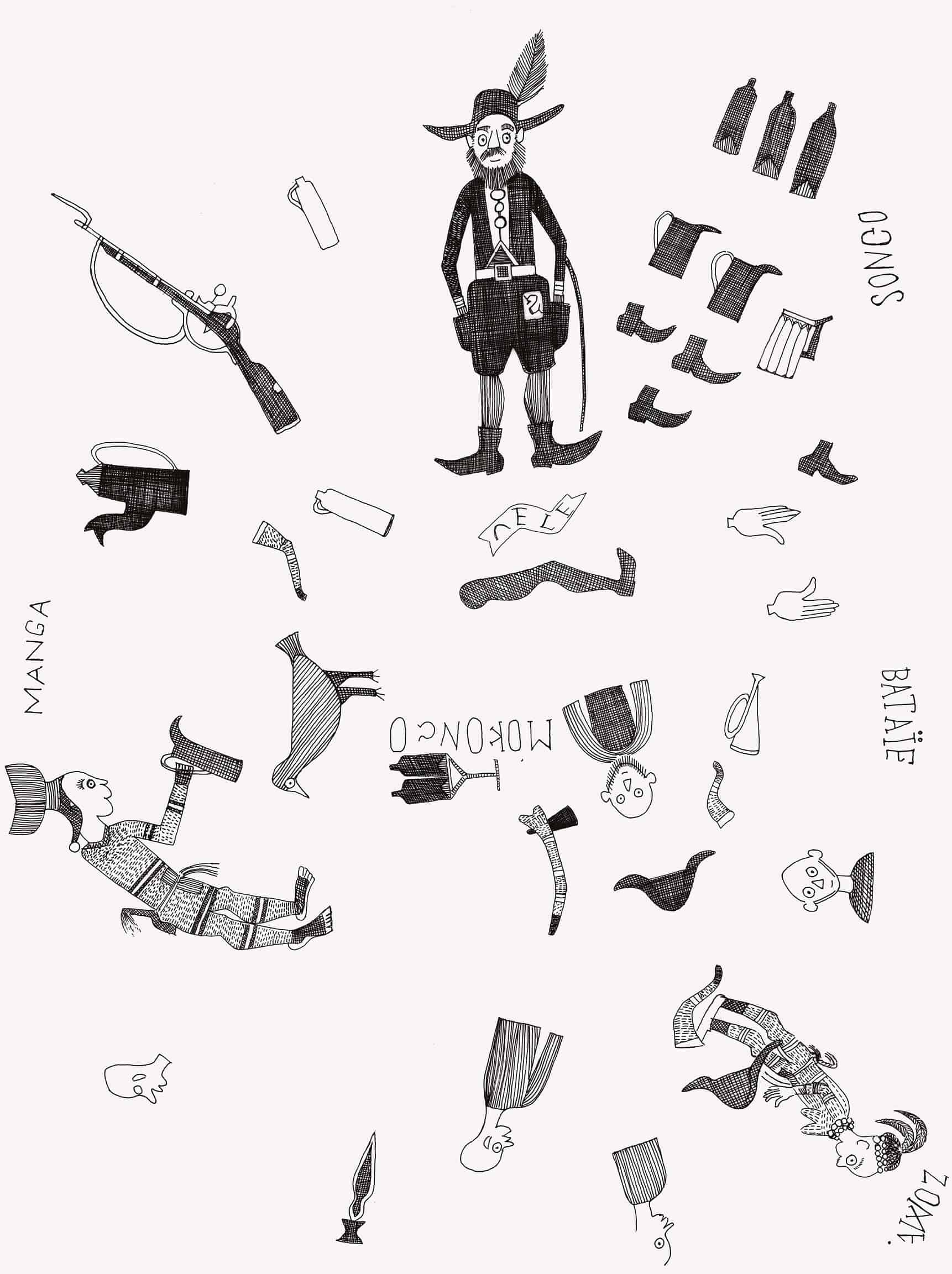 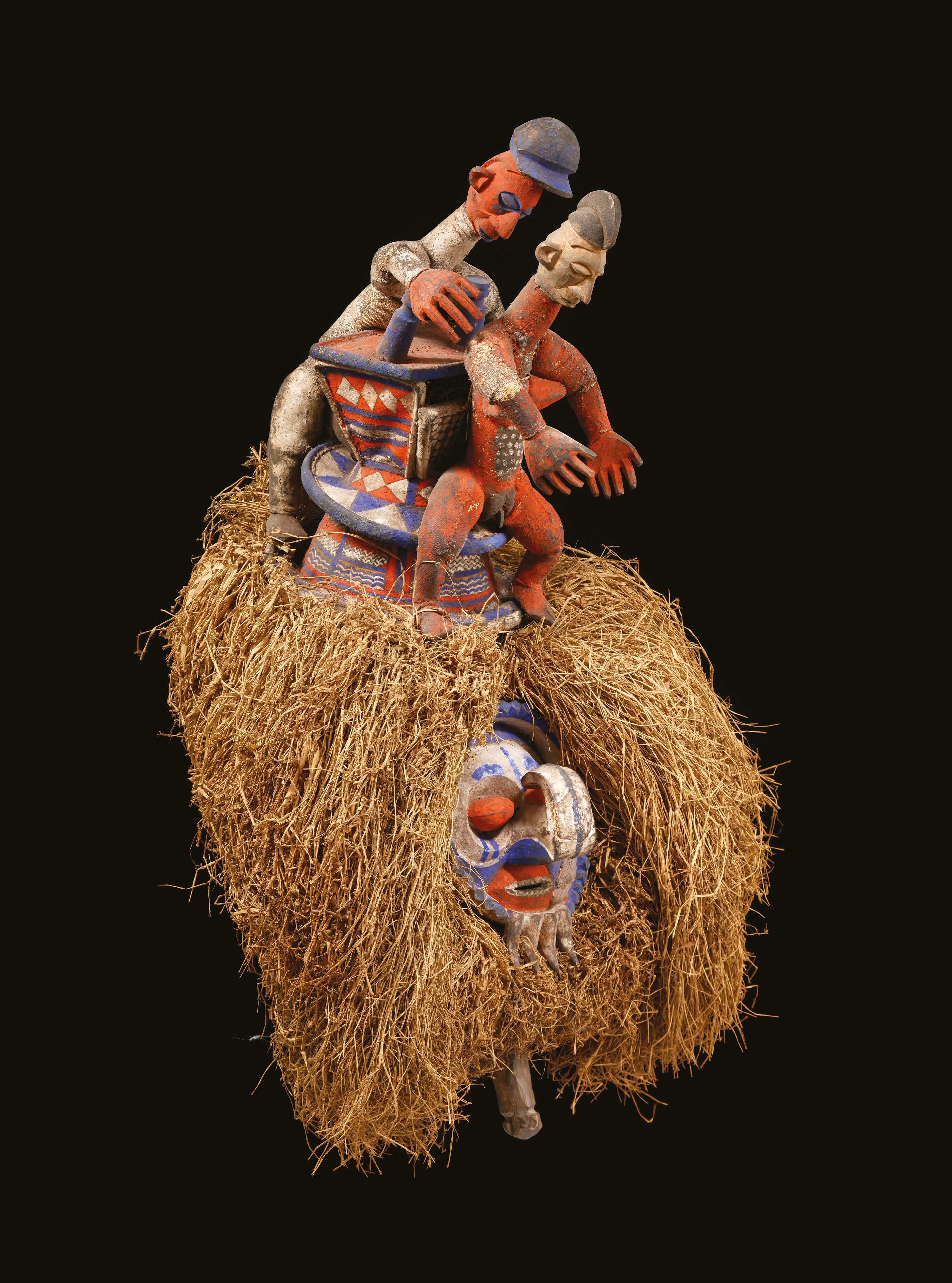 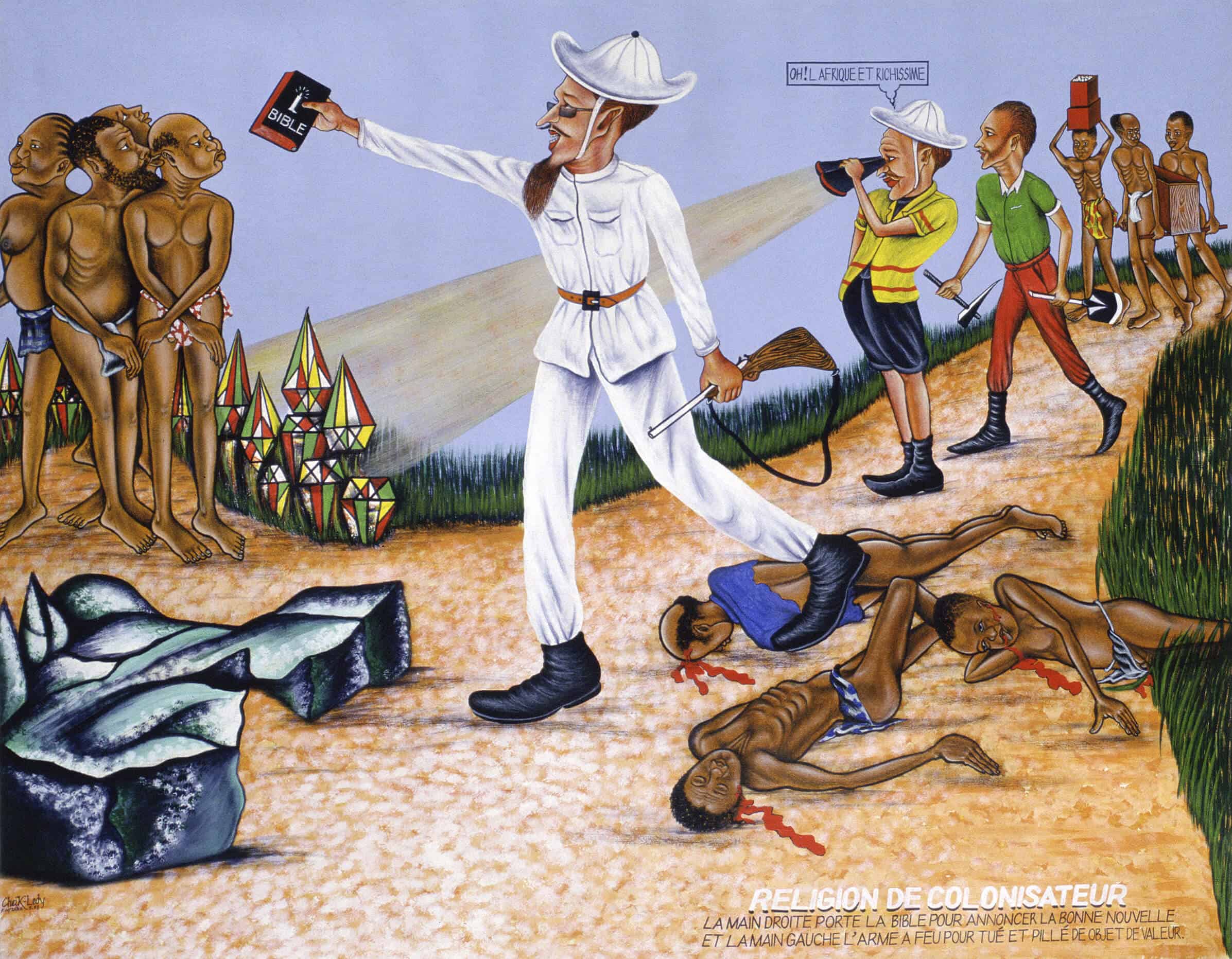 The allegorical coloniser fuses Henry Morton Stanley (whose self-styled uniform he wears) with the famous missionary David Livingstone. In viewing the painting, Congolese artist and curator Toma Muteba Luntumbue (born in 1962, the same year as Cheïk Ledy) was struck by the fact that the protagonist was not dressed like any missionary but wore the uniform of a colonial administrator and carried a gun like a soldier. The synthesis of administration, military, and church recalled for him the “animation” (“pantomimes” or theatre) staged by Mobutu’s political party, Mouvement populaire de la Révolution (MPR) to denounce colonialism at the opening of military parades in the 1970s. An actor would dress in the white uniform and pith helmet of an administrator and supervise a flogging to illustrate the misery and injustice of the colonial experience. The performance demonstrated what life was like before Mobutu took charge. In his speeches during these years, Mobutu would hammer home the point that Europeans had only been interested in diamonds, radium, and cobalt. He also denounced the church as the “weapon of the state” (arme de l’état).

Paintings in the “Belgian colony” genre were initially popular with Zaïrois, eager to show their support for Mobutu’s authenticity campaigns. But what are we to make of the fact that Cheïk Ledy produced Religion of the Colonizer to offer to a European client at a moment when Mobutu was losing his iron grip on power?

When asked about this, Toma Muteba Luntumbue responded: “The European is capable of paying the African to insult him… The dominator needs to have someone to dominate and the African victim reinforces the sense of his own importance… It is a form of narcissism because he speaks of himself through others.” In other words, when real power is declining, the memory of conquest can be comforting even when depicted in negative terms. In the European imaginary, the European is omniscient and powerful.

What role do Europeans and Americans perform in contemporary art? Is it possible that the vogue for colonial subjects and African victims is fuelled by nostalgia for white power?