Process, pain and possibility at the Intersectional Womxn’s March against Gender-Based Violence

“What’s freedom mean to me? It’s just a feeling. It’s just a feeling. It’s like how do you tell somebody how it feels to be in love? How are you going to tell anybody who has not been in love how it feels to be in love? You cannot do it to save your life. You can describe things, but you can’t tell them. But you know it when it happens. That’s what I mean by free. I’ve had a couple times on stage when I really felt free and that’s something else. That’s really something else! I’ll tell you what freedom is to me: no fear! I mean really, no fear. If I could have that half of my life. No fear.”

– Nina Simone, in the documentary Nina: An Historical Perspective by Peter Rodis

On August 1 last week I joined thousands of South African womxn and gender non-conforming individuals who took to the streets across our country to protest the state of gender-based violence. These nation-wide intersectional marches were billed as a “Total Shutdown”, with an economic boycott also encouraged on that day. I am still processing this, this grey-sky day of drizzle in the Cape Town CBD. I began my march experience in the Southern Suburbs, convening with my fellow protestors from UCT at 8am on Lower Campus before riding into town with them with bursting song and energy. We gathered at the CPUT campus on Darling with the other protestors and proceeded to march to Parliament, marshalls leading the way behind another smaller protest of mothers who have lost their children to gender-based violence.

2018.08.01: Pretoria, South Africa. At the March against Gender Based Violence. #nationalshutdown am with @dumselerato #thetotalshutdown

A womxn is mudered every four hours in our country. Tragically, she is likely to have been murdered by someone she loved and trusted, as researchers from the South African Medical Research Council’s Gender and Health Research Unit have found. In cases where a perpetrator has been identified, 57.1% of the murders of South African womxn were committed by an intimate partner. And so we dressed in black and red for the march, a mass funeral for those who have been lost, for there are always new bodies to mourn. Further responding to this were the other rich visuals elements of the march: posters that broke the silence. They ranged from the hilarious, to the poignant, to the problematic. My girlfriend’s sign read “PUT MEN IN RICE”, another complained that there is not enough imphempo to burn for this bullshit. Another, quoting Koleka Putuma, author of best-selling collection of poems Collective Amnesia, read, “I don’t want to die with my hands up or my legs open.” Others simply insisted, echoing the exasperation of protesters present, that enough is enough. 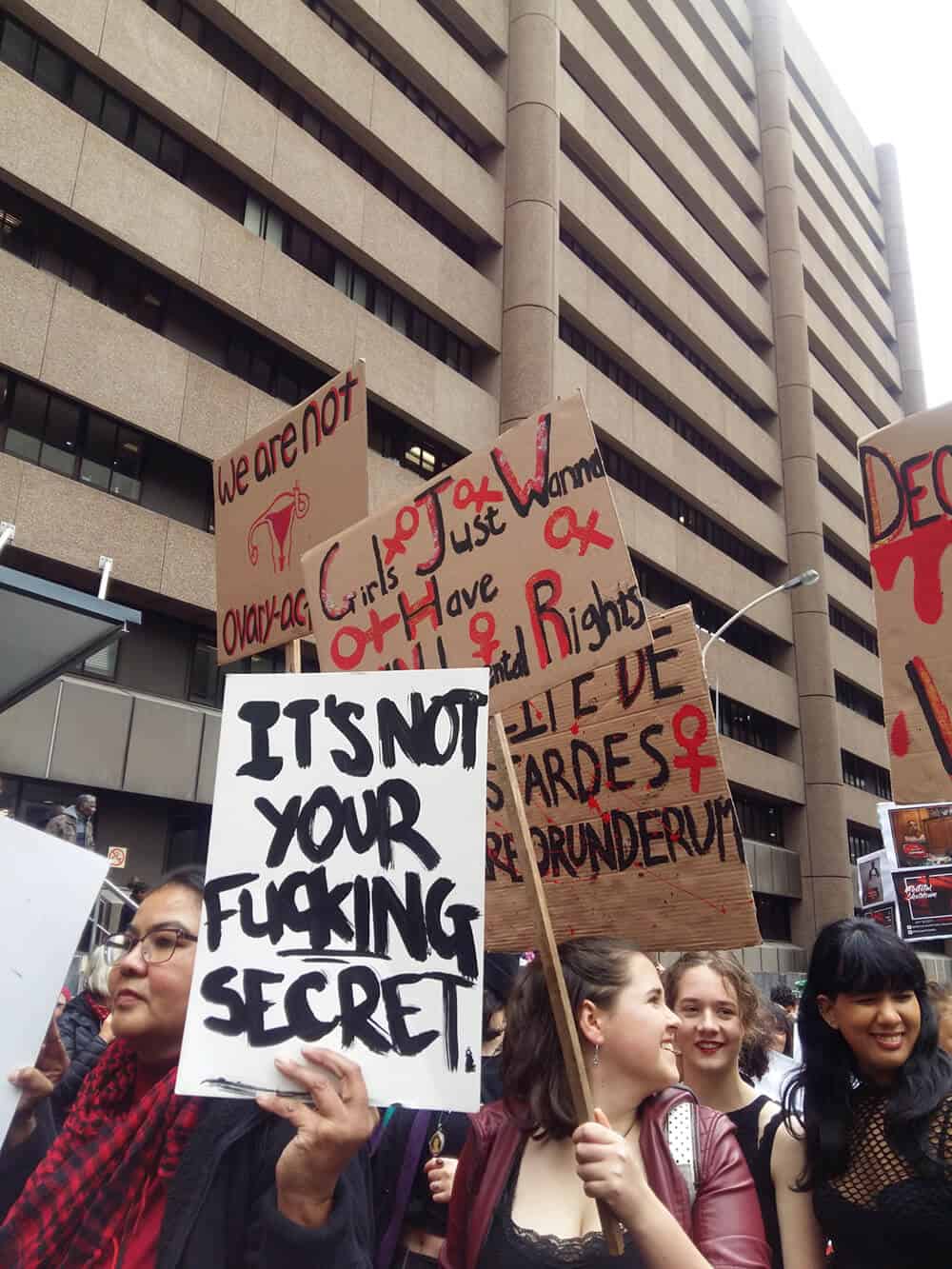 Some posters, despite the explicitly intersectional nature of the march, chose unfortunately trans-exclusionary slogans, with references to “ovary-acting”, uteruses, etcetera. While female genitalia is one of the most probable spaces of violence in South Africa, such phrases fail to take into account the experiences of transwomxn and gender non-conforming individuals within its discussion of gender-based violence. It recalls an interview non-binary performer and activist Alok Vaid-Menon did with StyleLikeU, in which they describe how genderqueer people are treated as tokens in spaces of supposed inclusion. “People will say, ‘OMG I love your outfit!’,” Vaid-Menon explained, “but no one is going to ask how you’re getting home.” Some of the posters of the march left me wondering how best we represent violence, overall. In an apparent attempt to make people aware of the extremity of domestic abuse some protestors chose to carry images of purpled womxn. While this macabre titillation may be effective in its shock value, it can be triggering to others, and succeeds in ensuring an eternity of objectification in life and death.

I am still processing this, this palimpsest of trauma layered by the stories our older sisters have told us, the statistics, the irony of my friend receiving unwanted male touch while protesting last week, and our own every day fears of walking down the street. #TheTotalShutdown, however, showed me possibility. It showed me the power of organizing at a grassroots level, how we can join together as a patchwork community of gender minorities to care for each other, ourselves, and mobilize when we are able to and need to. I hope we can strive to change such spaces to be more inclusive. I hope we can create more space simply for the tender holding of each other.

We were present. Parliament was too busy to receive us. But we were present, as we have always been… #totalshutdown #gbv #womensrightsarehumansrights 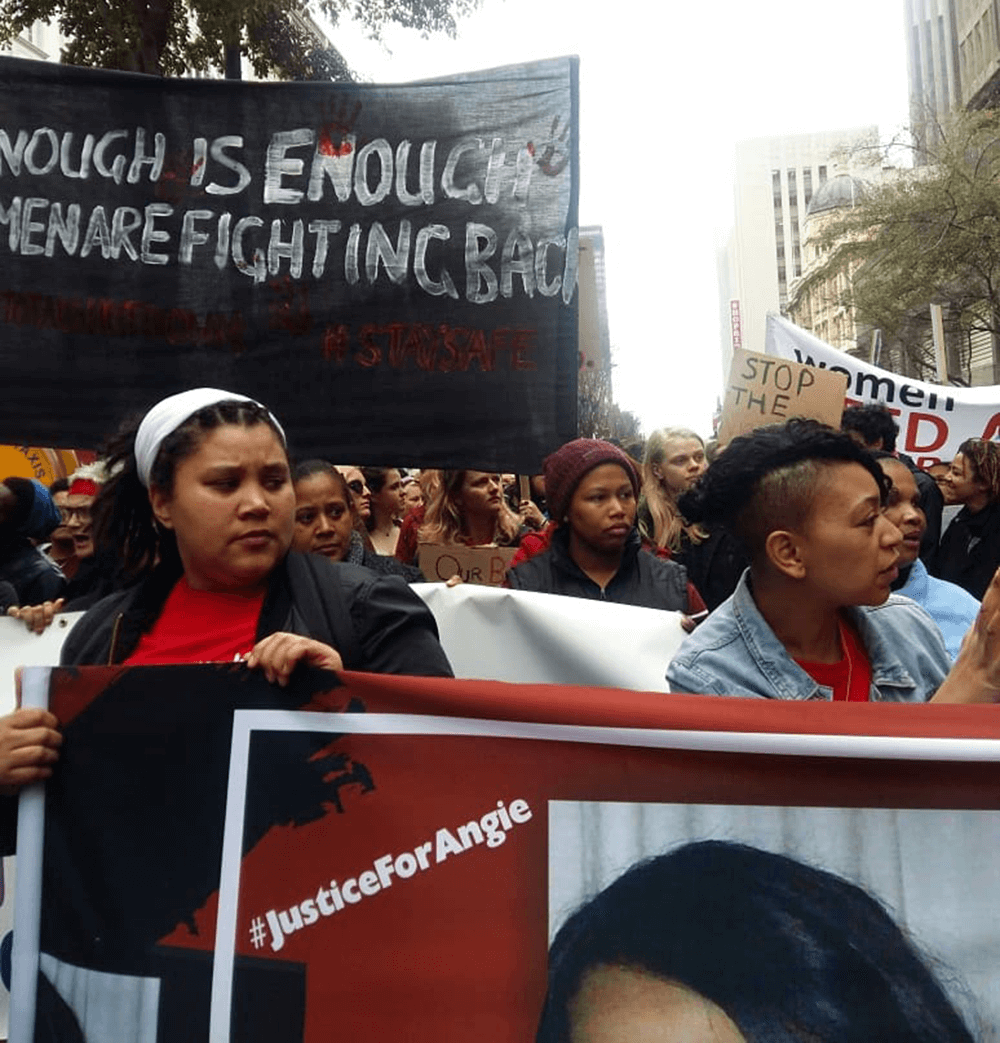