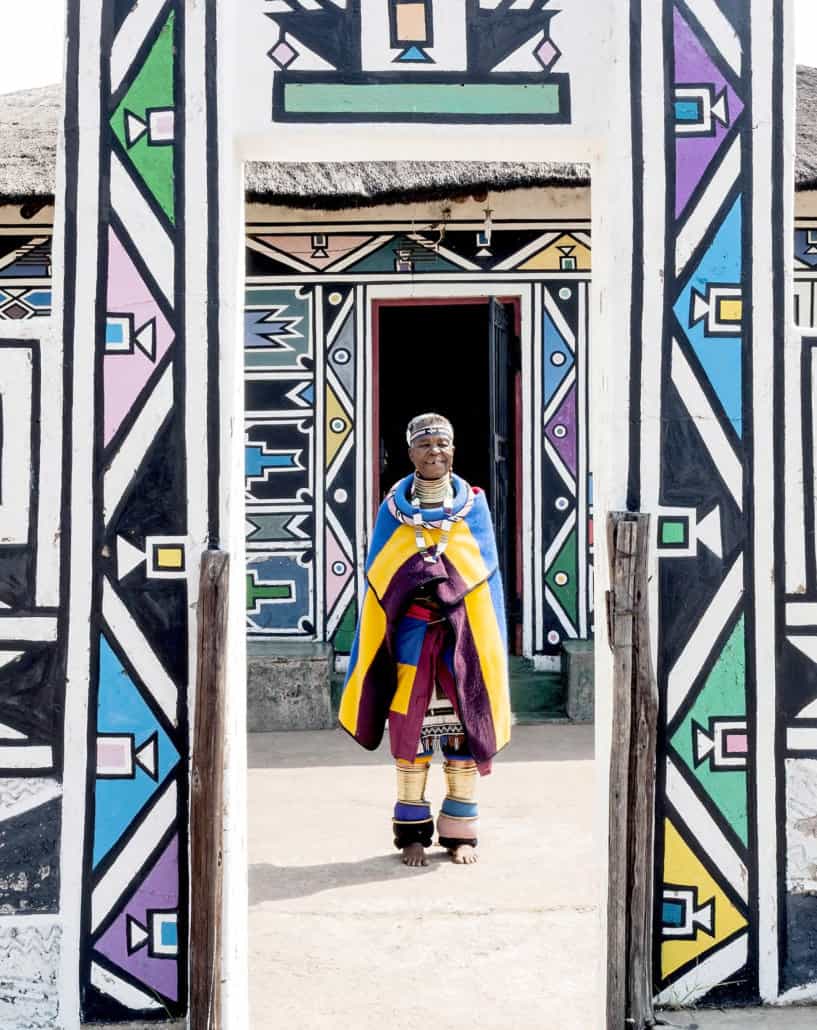 Thinking and writing about Dr Esther Mahlangu’s work may finally catch up with the quality of her 75-year long contribution to the modern art of painting. Dr Mahlangu’s image and success as a promoter of the arts and heritage of painting as practised by her people and community, Amandebele has often trumped critical appraisal of her work as a painter.

This is in part because she has never failed to or seemed to mind submitting to the demands of the industry of appearing. In fact, she has always stood out as quietly in charge of her own agency in the glare of it all. This has led to her spectacle as an elderly African woman in an exotic dress being foregrounded above her individual ideas as an artist. Her art is too often handled in this language of curios and commercially adopted traditional cultural artefacts.

In her many brand partnerships and collaborations, it’s not only her work that is placed on display but her person too. For generations weaned on social networks and search engines, she is the quiet “tribal” old lady who appeared standing alongside American R&B star, John Legend with playful candour for a brand promotional shoot for Belvedere Vodka. Dr Mahlangu was commissioned to design their limited edition bottle artwork in the colourful style of her “Ndebele tribal art,” as they put it. Many miss that Dr Mahlangu has for over 3 decades, without a gallerist managed a global career that made her into the pop icon we see today. Rooted still in her community, and her “tradition” she has since attracted the attention and company of a litany of celebrities: Usher, Alicia Keys, and Oprah have joined the horde of collectors the seek her work out. 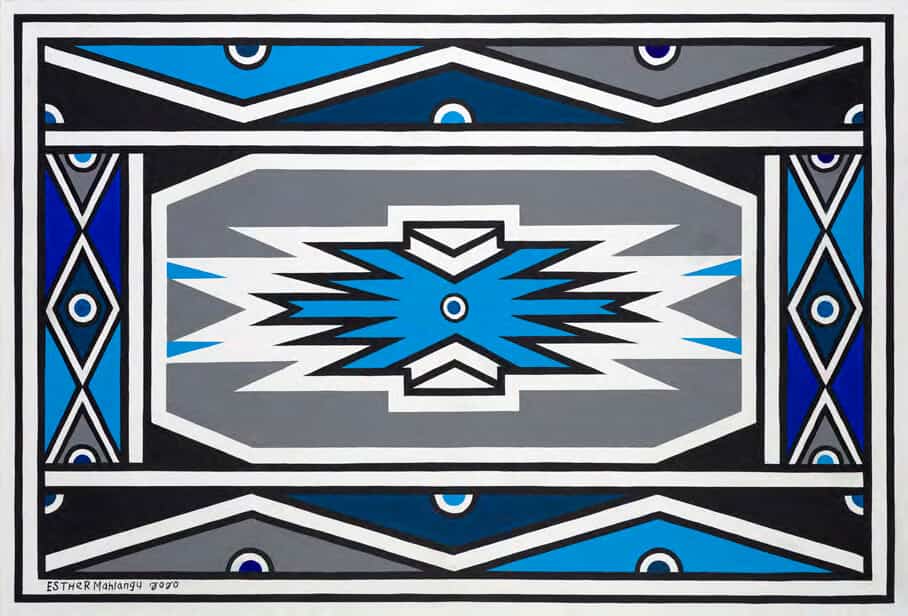 Then there’s her long partnership with car brands iconically captured in a photograph of her petched with quiet bashful pride next to the 7 series BMW Art Car at the 2016 Frieze Art Fair in London. As Petra Mason writes, “Previously art cars had been reserved as prestigious “boys’ toys” for the usual suspects: Andy Warhol, Robert Rauschenberg, Roy Lichtenstein, Frank Stella, David Hockney, and, more recently, Jeff Koons. Dr Mahlangu was not only the first woman to be added to that list, she was, and remains, the only African.” As one of the only two female artists to be included in the Jean Pigozzi Collection of Contemporary African Art, Dr Mahlangu was asked to paint a new Fiat 500 for their ‘Why Africa?’ exhibition in Turin, Italy. The ‘Mahlangu’ Rolls-Royce Phantom follows in this line of car collaborations with the artist.The project sees Dr Mahlangu as the first South African ever commissioned to create an artwork for the ‘Gallery’ of one of the new Rolls-Royce Phantoms. Each Phantom is designed with a glass box inserted in the dashboard that allows them to be creatively personalised. It will be unveiled during Cape Town Art Week 2020 at The Melrose Gallery, One&Only Cape Town.

The Melrose Gallery will also present her solo exhibition titled ‘Abstractions of a Culture’: towards a retrospective in the Past/Modern Section of Investec Cape Town Art Fair 2020. The show aims to put her work in historical context with a timeline that traces her three decades of painterly practice. The presentation is to be viewed as a step towards her retrospective exhibition to be curated by Nontobeko Ntombela and Nkule Mabasa. Then there’s ‘Disrupting Patterns’, a solo exhibition, which opens on 12 February and will run until 1 March at The Melrose Gallery, Cape Town.

Dr Mahlangu’s fans and followers of her work are in for quite a feast. For the artist’s legacy and the benefit of her public, it may turn 2020 into a year the art world breaks out of the antiquated mold of descriptors that often lose track of her individual painterly genius in the glare of her colourful career. 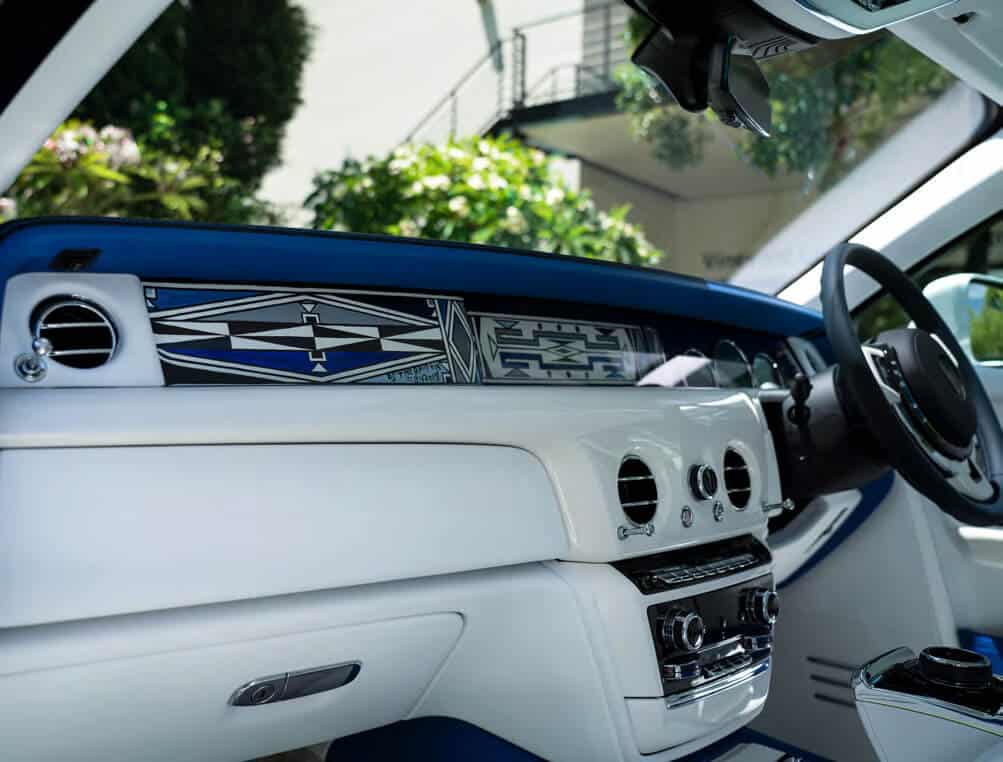 After all, Dr Mahlangu has never failed to rise to the occasion and gaze of the art market. The shortcomings have always been with the language by which her appearance and display have been mediated. In the mind of many obtuse commentators among the art cognoscenti, Dr Mahlangu stands as a representative of an exotic colourful Africa. One that art consumers are seduced by and all but urged to catch before it fades and vanishes. The spectacle around her modern work is often lost in a grammar that impoverishes our appreciation of her work and contribution.

A richer engagement with Dr Mahlangu’s work requires displacement of much bad historiography in our contemporary view of what we mean when we say she makes ‘Ndebele Art’. It is crucial to confront the shifting register of the ‘traditional’ or ‘decorative’ when discussing church painters like Piero Della Francesca or Michaelangelo who painted community church walls, and when we are confronted with work by painters who emerge out of communal painterly practice as Dr Mahlangu does.

Further, the identity we think of when we speak of Amandebele, is not an ancient African cultural expression. It, in fact, is a modern African expression. Consider that Amandelbele as a nation, was founded in the mid to late 1800s following Mzilikazi Ka Kumalo’s breaking away from King Shaka’s Zulu nation-building project. Consider that gold, a major industrializing force was discovered on the reef in 1886. Just less than 20 years after Mzilikazi’s death in 1868. This means the cultural expression we call Ndebele, as we see it today was only really fully formed in the early 1900s; a thoroughly modern time even by Southern African historiographical thinking. Dr Mahlangu’s language of painting really only came into stylistic maturity around the 1950s and 60s. The above is relevant because it allows us to eschew the ‘traditional African artist’ designation that often seeks to tribalize her work and mute her individual creative agency in the process.

As an artist, Dr Mahlangu first entered the global art consciousness with her first major international showing in 1989 as ‘Les Magiciens de la Terre’, Centre Georges Pompidou, Paris, France. Dr Mahlangu, who always appears in Ndebele garb is still all too often denied contemporaneity of current painterly trends in unfolding art history. Her clothing is never discussed as part of an ever-evolving set of ‘fashion’ choices and taste, but some-time frozen traditional regalia. This is not unlike the way the historic ‘Les Magiciens de la Terre’ posited her and others as magicians of the ‘earth’ not magicians of the ‘world’ which would have been les magiciens du monde. Hence, suggesting a relationship with nature not culture and civilisation. 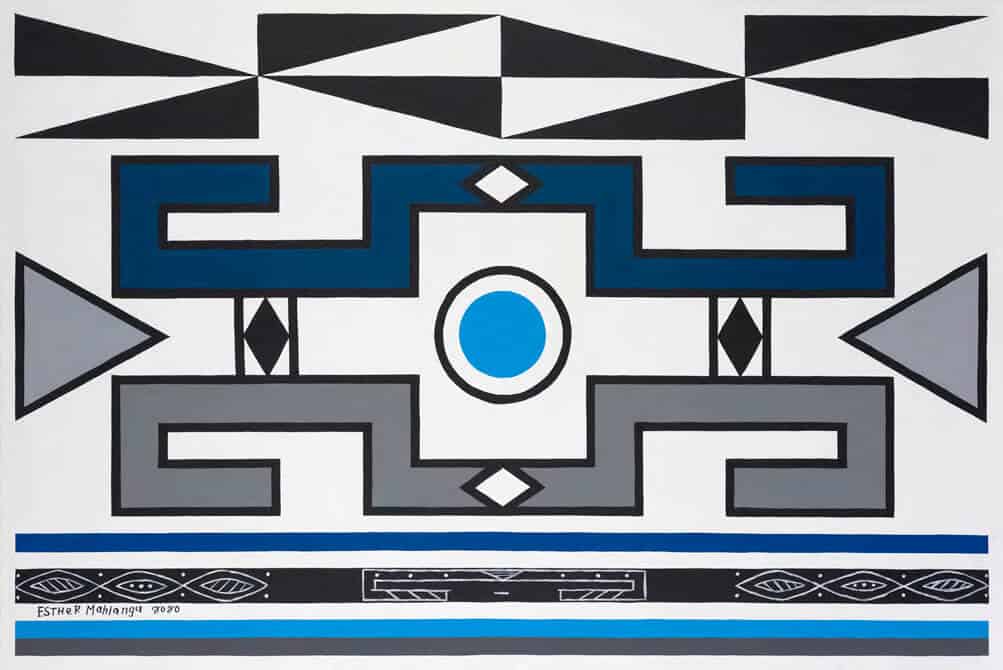 This is part of why we miss the shifts and progress in her approach to art making. For instance, increasingly, Dr Mahlangu’s work done on canvas for the gallery market, has developed a diagrammatic precision not seen in her early works. Though it retains much of the vitality of colour, her lines have shedded the earlier organic feel. She has none of the apparent marks of a painter’s controlled wrist akin to the grace we look for in the brushwork of a masterful calligrapher.

It’s been years since Dr Mahlangu migrated the artform that first emerged within the decorative practices of her people into a contemporary art practice. Over these years she has expanded the possibilities in its use of colour and form. Much of her creative advances, however, go unrecorded because of insistence to read her as an essentially ‘tribal/traditional artist’.

As we gird ourselves for a season of celebration of her life and work this year, we may take a chance to see beyond her ethnicity and awake to Dr Mahlangu as an artist, writ large.