Dr. Esther Mahlangu, the world-renowned South African Ndebele artist, has been bestowed with the Officier de L’Ordre Arts et Lettres (French Order of Arts and Letters) by the outgoing Ambassador of France to South Africa, Christophe Farnaud. The honouring, which coincided with Bastille Day, took place at the French embassy in Pretoria. 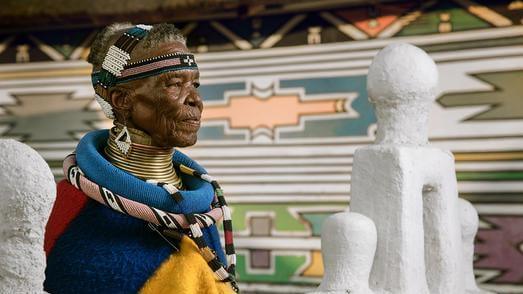 The French ministry of culture awards the order to individuals who have made a significant contribution to the enrichment of arts and literature in France and abroad. The 83-year-old, Mahlangu, is the fifth South African to receive the award and joins a list of honourees that includes the late Johnny Clegg (1991), William Kentridge (2013), Gregory Maqoma (2017) and Zanele Muholi (2017).

Mahlangu’s relationship with the French began in 1986 after researchers from Paris saw the paintings on her house and invited her to create murals for a landmark exhibition of international contemporary art,  ‘Les Magiciens de la Terre‘ (‘The Magicians of the World’), at the Pompidou in 1989. This was Mahlangu’s first exhibition and it catapulted her into the international art world. In a 2014 interview with ART AFRICA, the artist reflected on the impact the exhibition had on her career, saying, “I felt that the people from France understood my work and they showed me great respect. Since then I have always been treated much better internationally…” 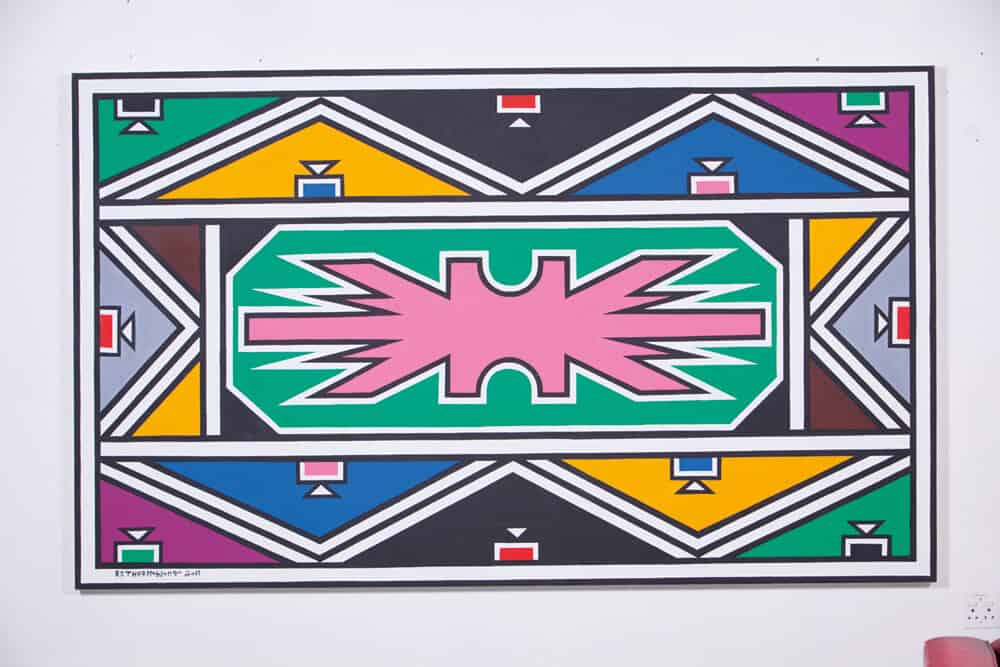 During her time in France, Mahlangu participated in various projects and painted a mural on a wall inside The Musée d’Angoulême. Since then Mahlangu has had multiple exhibitions in Paris and other French cities such as Bordeaux and Nantes.

Esther’s artistic talent became apparent when, in keeping with the tradition of the Ndebele people where women paint the exterior of their houses to mark special occasions such as birth, death, weddings and the initiation rite of passage of boys, she was taught the skill of mural painting by her mother and grandmother as a child. By the time she was a teenager, she was an expert in mural painting. During her career, Mahlangu’s work evolved and innovated traditional Ndebele craft and she started transferring it to canvas and using commercial paints instead of natural pigments and cow dung. Despite this change Mahlangu still uses the traditional painting style in some of her work and steadfastly continues to use traditional equipment, saying, “Most of the tools I use are also still the same – the small brushes are made from chicken feathers, the big tool I use for drawing thick lines is made from Bobbejaan’s stert (baboon’s tail), a plant that grows here in Mpumalanga. Sometimes when I can’t get chicken feathers overseas I use commercial brushes but I don’t like them.”

Mahlangu’s commitment to the Ndebele culture is evident in all her work and she is attired in her traditional regalia whenever she travels internationally. She believes that art roots the Ndebele in their culture and to preserve this heritage she opened the Esther Mahlangu Ndebele Art School in her village in the Mpumalanga province where young girls are taught traditional beadwork and painting.

Should Contemporary Art last for future generations?
Scroll to top