The Savannah Centre for Contemporary Art, located in Tamale, Ghana, is an artist-run project space, exhibition and research hub, cultural repository and artists’ residency. It is an initiative of world-renowned Ghanaian artist, Ibrahim Mahama, as a contribution towards the development and expansion of the contemporary art scene in Ghana. SCCA-Tamale intends, with its diverse programming and research interests, to spotlight significant moments in Ghanaian and international art in a communal space. Affiliated to blaxTARLINES KUMASI, the Centre is operated by committed, dedicated and generous persons who produce a critical discourse that will eventually be disseminated through exhibitions, publications and allied activities. SCCA-Tamale is dedicated to art and cultural practices which emerged in the 20th Century and inspire generations of artists and thinkers of the 21st Century and beyond. 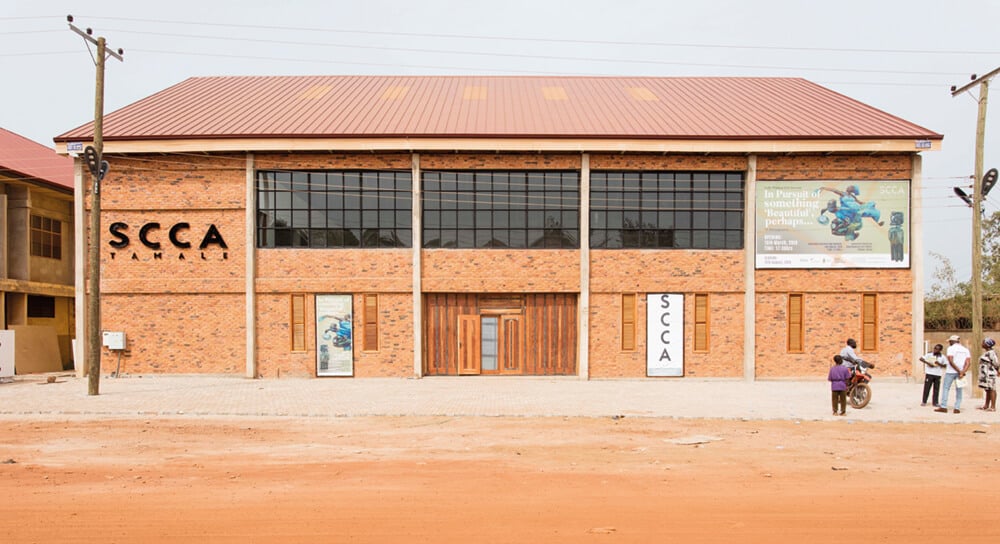 ART AFRICA: What was your motivation for creating the Savannah Centre for Contemporary Arts (SCCA)  and how has the opening of the centre been received in Ghana?

Ibrahim Mahama: The SCCA was originally conceived of as a studio space. I am very interested in the history of art as well as the history of exhibitions from Ghana and how local spaces have exhibited art and the forms those works have taken over the years. There was a pattern. Most of the early modernists up until the late ‘90s and early 2000s were mostly exhibited in hotel spaces. The national museum was supposed to have been designed and completed but never was. Such institutions were supposed to be for exhibiting and contextualising artists’ works and the kind of work artists were making, and the uncompleted museum affected the way a lot of artists made their work. If you are going to exhibit your work knowing that it will be exhibited in a specific space it limits the material values in your mind and how you go about approaching and producing the work. That was one of the main reasons that motivated me – as an artist – to create a space outside the traditions of exhibition spaces. I find it exciting to go to old factory spaces, marketplace centres, and abandoned modernist structures. The history of these spaces have become very important to me as starting points to produce my own artwork. I travelled around the country, inspired by factory and workshop spaces, borrowing some of the architectural formalities of these institutions in the construction of the SCCA. I originally conceived the SCCA as a studio space, as a place of production, but at the same time I was also interested in what producing something can mean to its exhibition context. The idea was to create something that gave artists and practitioners the liberty and the freedom – with regards to space – to play around and to stretch their ideas in whichever way they wanted. It’s been received very well. The cultural sector, particularly fine art, has not been perceived as a space worth investing in, especially in poor regions, but that was not my concern. My concern was the existence of the institution and what it can propose. There have been a lot of activities happening there, school children visit our library regularly, and we are also creating an educational programme which involves film screenings and inviting artists and other practitioners to give lectures. I think that it will begin to open a different kind of community altogether. 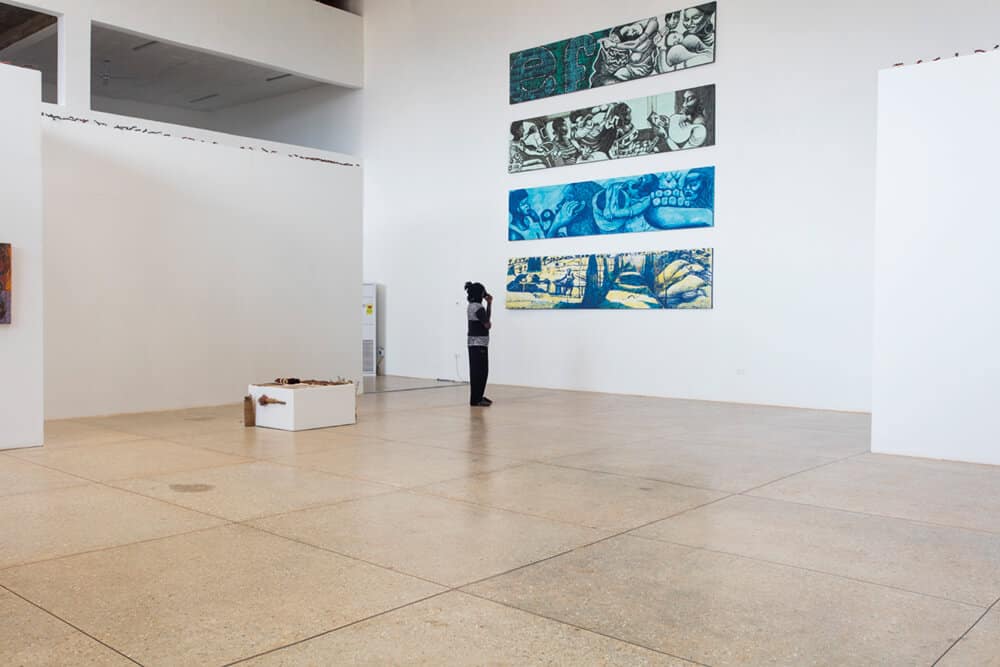 What role do you see established contemporary artists like yourself playing in addressing the dearth of institutional support in your country –and other regions of Africa?

Artists too can play an important institutional role in supporting the regional cultural scene. When I first thought about SCCA I wasn’t thinking about it in relation to just the contemporary practice of arts, I was thinking about it in relation to the culture and the perception around objects from recent and ancient history. I was thinking about this in relation to land, the geographical context, and technology. Other spaces in SCCA include studio spaces in which artists have the opportunity to do a one- or two-year residencies and focus on creating a body of work or developing practice for a specific context-based exhibition – unseen in Ghana. Academics in the  Department of Painting and Sculpture at the Kwame Nkrumah University of Science and Technology, specifically professors like Dr Kari Kacha Seidou, Kwaku Boafo Kissiedu, George Ampratwum, and Dorothy Akpene Amenuke, have actually contributed a lot to students’ practices over the last decade. They have impacted my own practices as an artist as I don’t think I would have had my own practices without these individuals. Personally, it has been motivating looking at what energy institutions, specifically the art academy, channel into building institutions that stretch artistic practices in general and the preservation of practices that came before us. There is a gap between the younger generation and the older generation. The older generation thinks that my generation is very lazy because we seem to be making some kind of degenerate art and because a lot of the mediums that we use do not fit the context that they grew up and practised art in. In my opinion, I do think that artists have a really significant role to play in the institutional building – no matter the shape or size of the contribution. In the end, SCCA is going to be much more than a contemporary space – we are looking at forging an institution that inspires a generation of young people across disciplines. I think that is what is yet to emerge. 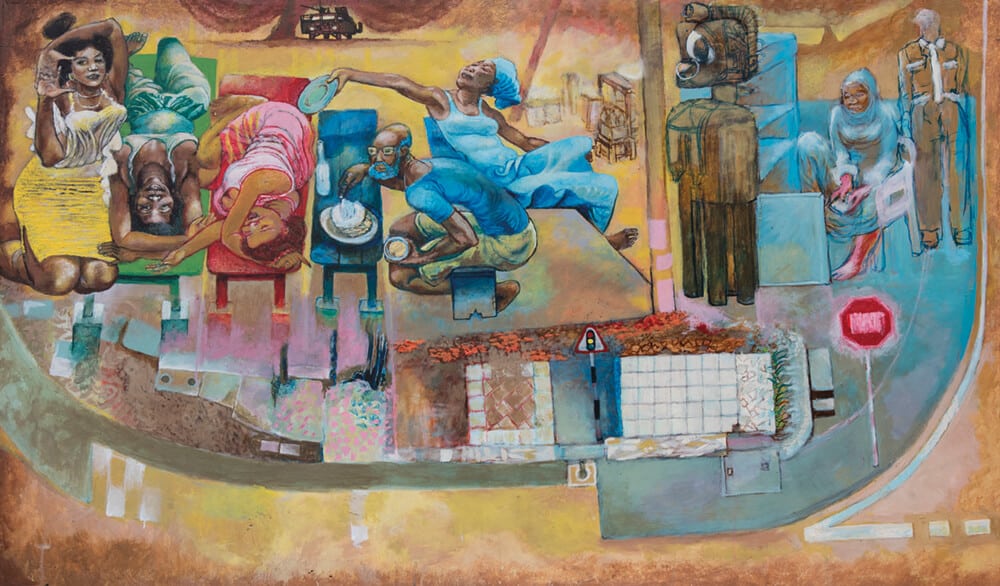 Why did the SCCA centre decide to debut its programming with a show of Kofi Dawson in particular?

I have had a long history of interaction with him. I’ve always known him and his practice. In Accra he is one of the few artists who attends all the exhibitions of all generations – even music concerts – so I’ve always encountered him one way or another in a cultural sector. In 2015 we met in Nigeria when we went to Nsukka in honour of El Anatsui and we had a brief interaction. Around that time I spoke to him about the possibility of doing a retrospective on his work – he is an artist whose practices have never really been contextualized. I wasn’t really looking at doing an exhibition on an artist whose practices were already well known. Creating SCCA was for looking at the overlooked and focusing energy into contextualizing these things. He is one of those few artists who experimented significantly in his own practice through the mediums he used – if it was painting, then everything was reduced down to the flatness of the painting or the canvas, very limited to shape. His work spans sculpture and textile, even making his own brushes and using plastics of roofing materials to make sculptures, and the collaborative techniques he used include working with traditional women to make some of the pieces of his earlier career. He made a lot of notes, and the extensive record of these and his ideas are exhibited. I was very interested in this range of different forms. Given that it was a debut exhibition that would open up the space, we wanted it to be something that was very holistic and something that presented something new and fresh to our generation. Many people were not very familiar with his work, so I’m really glad we made the choice to exhibit his work. Following Mr. Dawson, we are looking at other contemporaries of his – filmmakers, playwrights, writers, architects, scientists. The idea is to use SCCA as a platform for experimentation and also as a place for failure. With artists like Mr Dawson, whose practices are not that well-known, you are not too sure how audiences are going to receive the works, but at the same time it’s exciting because SCCA becomes a place of discovery – people come expecting something – and maybe they might be disappointed and maybe they might be presented something else. SCCA was conceived originally as a production space, as a studio, based on other production spaces like factories that were embedded in these deeply set failures from the 20th century onwards, which begs the question: how do we use those failures as a precedent or a premise in the way that we think about our contemporary condition or situation today? 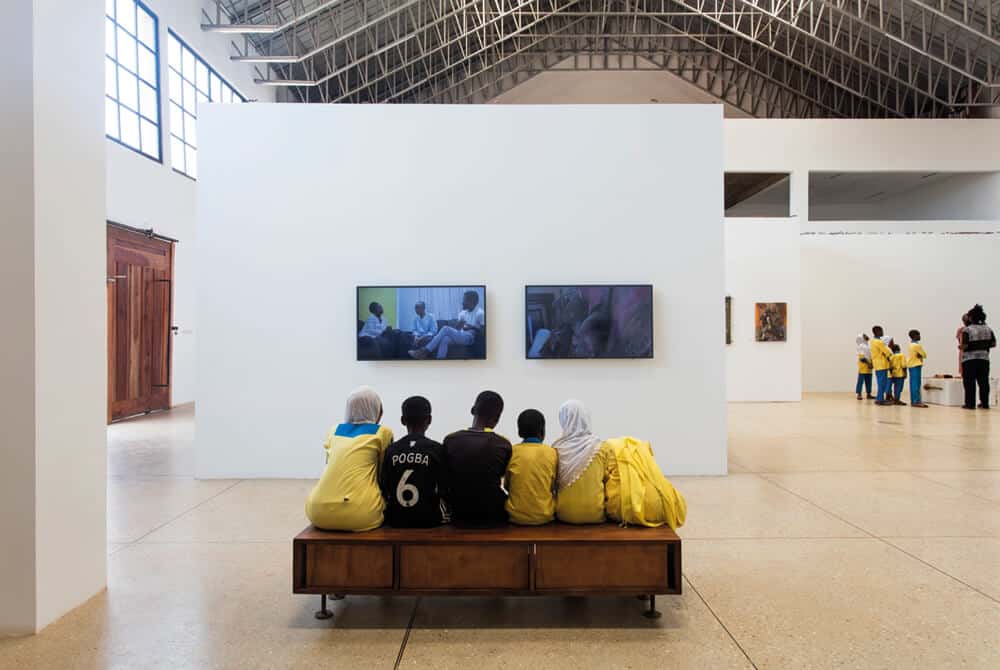 ‘Galle Winston Kofi Dawson: In Search of Something ‘Beautiful’… Perhaps’ will be on view at SCCA-Tamale till 15 August 2019.

'In Pursuit of something 'Beautiful', perhaps...' at SCCA